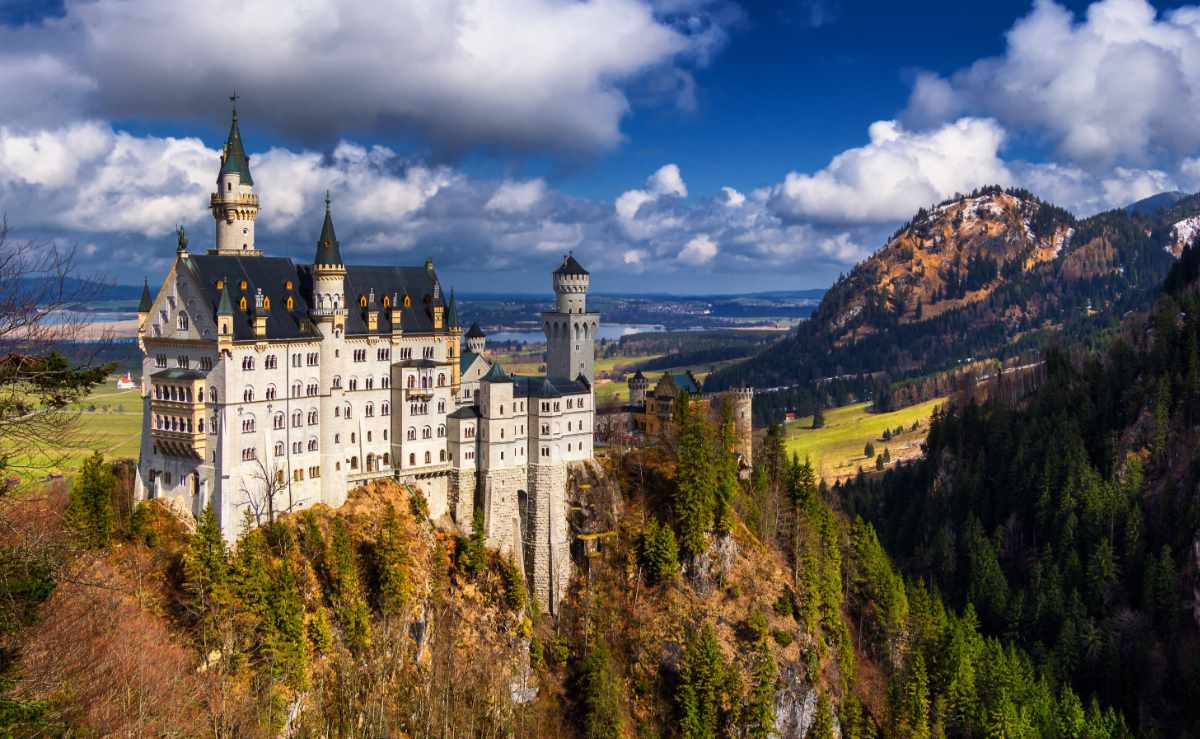 From crumbling ruins to towering turrets, Game of Thrones to Hogwarts, there’s something uniquely appealing about the grandeur of a medieval castle. But there’s a lot more to them than brutalist battlements and cold, hard rock.

These refined fortresses are reclaiming the castle aesthetic, one coloured roof tile at a time…

The pinnacle of the French Renaissance, this positively palatial castle is more Versailles than Bastille, and overlooks gardens the size of central Paris. It was built in the 16th century for Francis I, and promptly won plaudits for its double helix staircases, and sprawling array of towers.

Partly designed by Leonardo da Vinci (probably), Chambord is now a UNESCO World Heritage Site and major tourist attraction, with more than half a million visitors wandering its ramparts each year.

Ensconced in the depths of the Transylvanian valleys, this foreboding fortress is synonymous with one thing: Dracula. The connection is good for tourism, but does the castle something of a disservice, as there’s much more to the fortress than a tenuous link to a local legend.

The mountainside setting serves up superlative views out over the valley, and the crumbling ramparts lend an undeniably eerie ambience. Inside you’ll find questionable displays linking the castle with Bram Stoker, which, since the author apparently never visited Romania, are hard to take seriously.

Surely the most unusual castle on this list, Pena Palace resembles what might happen if a sumptuous piece of Mediterranean masonry found its way into a children’s colouring book. From brightest yellow to deepest crimson, the castle sparkles above the town of Sintra like a giant sundial, a mishmash of moorish, romantic, and neo-gothic styles.

A UNESCO World Heritage Site since 1995, the castle is still sometimes used for official state functions.

A postcard-perfect prototype of feudal Japanese design, castles like Himeji can be found all over Japan, but none measure up to its splendour and scale.

Miraculously, this medieval masterpiece survived firebombing during World War Two and any number of earthquakes, and keep, walls and gatehouse stand steadfast to this day. Surrounded by seasonal cherry blossom, it’s just as well the complex contains of a whopping 83 different buildings, as it hosts more than 2.8 million visitors a year.

One of the most photographed and hard-to-spell castles on Earth, the breathtaking Neuschwanstein Castle is nearly as beautiful as its surroundings. Perched atop a rocky outcrop amid the forests of Bavaria, the castle remains a textbook example of high German romanticism, and serves up panoramic views across the foothills of the Alps.

Begun in 1869, the intended three-year project took 23 years to complete, and its commissioning king, Ludwig II, died prior to completion. Pop culture royalty, Neuschwanstein was the inspiration for the castle in the Disney logo, and featured in Chitty Chitty Bang Bang.

Not one of the world’s most opulent castles, but easily among its most dramatic, Predjama Castle in Slovenia protrudes from the mountainside as if hewn from solid rock. Officially the world’s largest ‘cave castle‘, the fortifications are built over the entrance to a subterranean lair home to a large colony of bats.

Nigh on impregnable from the front, a secret passageway leads through the rock face all the way to the top of the cliff, used for resupplying under siege.

Rising directly from the waters of its very large moat, this sturdy stronghold near the Dutch city of Utrecht has everything a good castle should.

Pointed towers and brutish battlements keep watch above an austere gatehouse and drawbridge, forged from the ruins of a medieval forebear in the late 19th century. The interior is almost jarringly different – a den of luxury filled with expensive artwork, rich ornamentation, and 30 bathrooms.


Beautiful in its simplicity, Castel del Monte proves you don’t have to be large or lavish to be aesthetically appealing. A perfectly octagonal citadel that would fit as well in Morocco as Italy, it was made a UNESCO World Heritage  in 1996 for the ‘mathematical and astronomical precision of its layout’.

Completed around 1240, it was the vision of Holy Roman Emperor Frederick II, whose famous cosmopolitanism saw him pack his court with different nationalities and learn six languages to fluency.