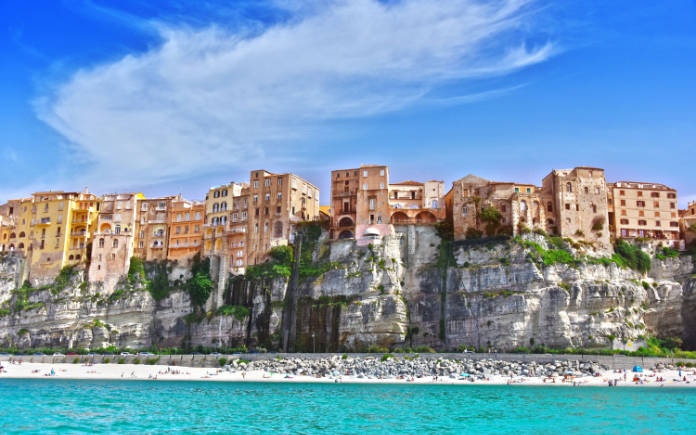 Italy has so many stunningly scenic settlements that it can be difficult to keep track. From the tree-lined hills of Tuscany to the arid olive fields further south, the country is synonymous with sleepy, traditional villages built from red-brick and stone, surrounded by sumptuous Mediterranean countryside.

The Borghi più belli d’Italia association (literally “Most Beautiful Towns of Italy”) exists to document and protect these appealing places, and maintains a list of settlements containing fewer than 15,000 people, that tick an array of other boxes for heritage, sustainability and infrastructure.

Dubbed ‘the Pearl of the Tyrrhenian Sea’, Tropea is perhaps the best known of our new entrants, and in summer the streets disappear beneath an invasion of sandals and parasols. The coastal cliffs are among the sheerest in Italy, merging almost imperceptibly into the facade of white-rock buildings above, and two and a half miles of sparkling sands lie at their base.

Atop a rocky outcrop perches a 4th century monastery, which appears on most of the postcards and looks as if it has come from a fairy tale. The town is also known for sunsets, red onions, the Norman Cathedral, and a six-day long September blues festival.

Italy ties with China to be the country with the most UNESCO World Heritage Sites, and Monte Sant’Angelo boasts two of them – not bad for a town of 12,000 people. The Sanctuary of San Michele Arcangelo (inscribed alongside six other Lombard buildings) is the oldest shrine in Europe dedicated to Archangel Michael, while the ancient woodland of the neighbouring Foresta Umbra hosts beech trees that live for three centuries.

Overlooking the Adriatic on one side, and the Gargano National Park on the other, the rest of the town is just as photogenic as you might expect.

Surrounded by hillocks and ensconced in a patchwork of trees, Bassano in Teverina looks, feels and to an extent is cut off from the outside world. Overlooking the Tiber River Valley, it was probably founded by the ancient Etruscans, and a smattering of tombs and ruins remain.

The town itself is a classic of the genre, a jigsaw of cobbled streets and staircases clambering up and down the undulating terrain, and there are tiny churches crammed into every nook and cranny.

A red-roofed town atop a raised plateau, with lush green forest falling away on every side, Monteleone d’Orvieto in Umbria is stunning enough to make even Tuscany jealous. Expect the usual array of red-brick churches and well-stocked trattorias, plus a much-less-usual array of panoramic, Insta-worthy views.