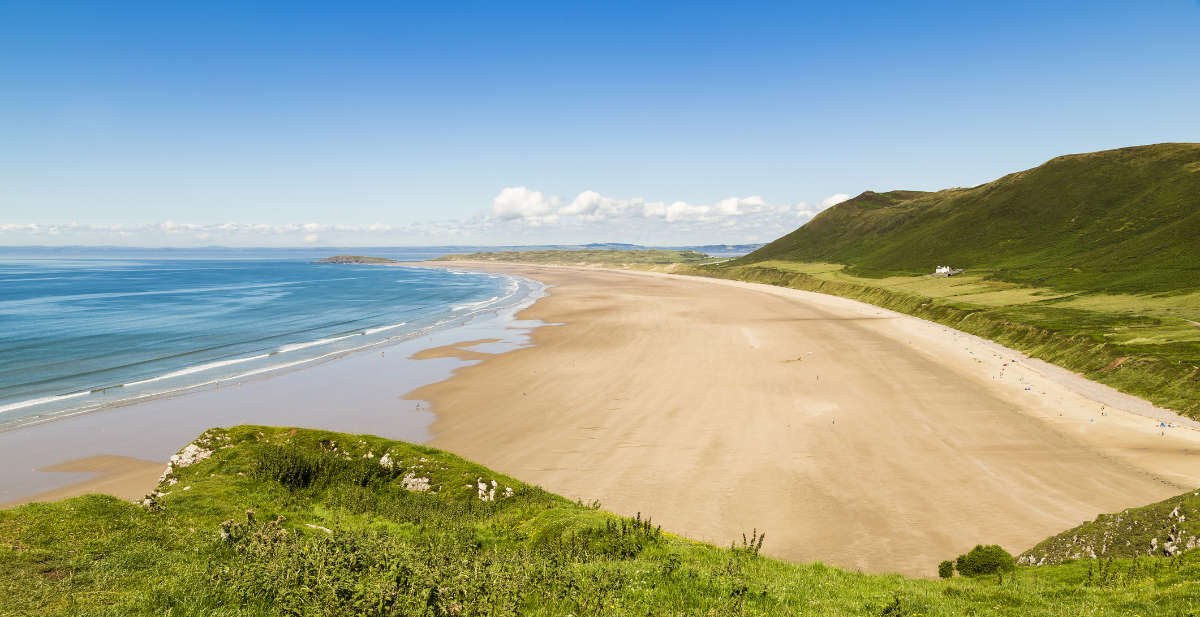 If this endless winter’s got you dreaming of empty, golden-sand beaches, we don’t blame you. But while you might imagine you need to fly thousands of miles to find such paradise, there are actually some pretty out-of-this-world beaches in Wales.

6 of the best Welsh beaches

Here are six of Wales’ most beautiful beaches.

Let’s start with the best. Rhossili Beach, on the south coast, has been crowned Wales’ best by TripAdvisor. It’s dog-friendly and the golden sands stretch for three whole miles. From here, you can visit the area’s most famous landmark, Worm’s Head – an island joined to the mainline by a rocky causeway, which can only be seen two-and-a-half hours before before and after low tide.

The fairy tale-like seaside town of Tenby has postcard-worthy views everywhere you look. Pastel-coloured houses and fishing boats curl around the Tenby North and Harbour Beach. But the 1.5 mile-long South Beach could be straight out of the tropics (if only it were warmer!).

This little cove, protected by National Trust land, is only accessible by a half-mile walk from the nearest car park near Stackpole village, and with no buildings in sight, it feels completely unspoilt. This spot was once named the best place for a picnic by Country Life.

Another National Trust beach, Porthor, on north-west Wales’ Llŷn Peninsula, is also known as ‘Whistling Sands’, because of the sound the gleaming sand makes underfoot when you walk across it. The beach cove, backed by steep grassy cliffs, is a popular spot for surfers when the waves suit.

When it comes to rugged Welsh coastline, Three Cliffs Bay has it all – sand dunes, salt marshes, limestone cliffs and, of course, spectacular golden sand. It’s a beautiful part of the Gower Coast Path but the bay’s location means the water and winds can be harsh, so swimming or water sports aren’t recommended.

Part of the Snowdonia National Park, Barmouth lies on the estuary of Mawddach river and Cardigan Bay. The long sandy beach is big enough that even when it’s busy, it doesn’t really feel it, and you can’t come to this part of the world without a walk along the spectacular Barmouth Bridge, spanning the river. William Wordsworth even called it “glorious” back in 1824.