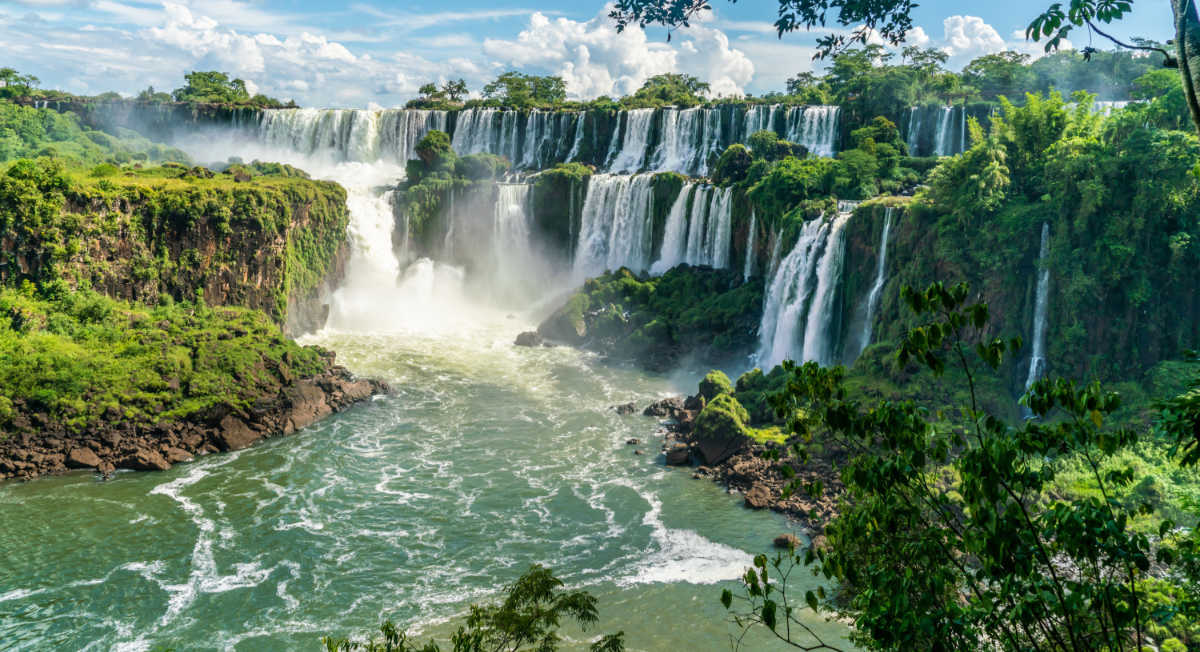 Showcases for the kind of aquatic power not often seen on dry land, there’s something unusually compelling about the sight of an entire river rocketing down a sheer drop.

There’s the spectacle of the thing, the sometimes deafening sound of pummelling water, and the spray flecking your face from seemingly impossible distances.

Here are a few fabulous falls to see around the world, from trickling tributaries to Amazonian cliffs.

10 of the most famous waterfalls in the world

The only thing it lacks is a sense of national identity. Straddling the border between Brazil and Argentina, the waterfall can be viewed from either country, and debate continues over which side wears it best.

Victoria Falls is not the tallest, widest, or most voluminous waterfall in the world, but it is considered the largest when all three figures are combined. Named ‘The Smoke That Thunders’ in the local language, its cliffs bear the brunt of the entire Zambezi River, landing it a spot alongside the Great Barrier Reef and Mount Everest as one of the Seven Natural Wonders of the World.

Famously discovered by David Livingstone, visitors today can stand on Livingstone Island – the outcrop on which the explorer emerged from the jungle and sighted the falls for the very first time. 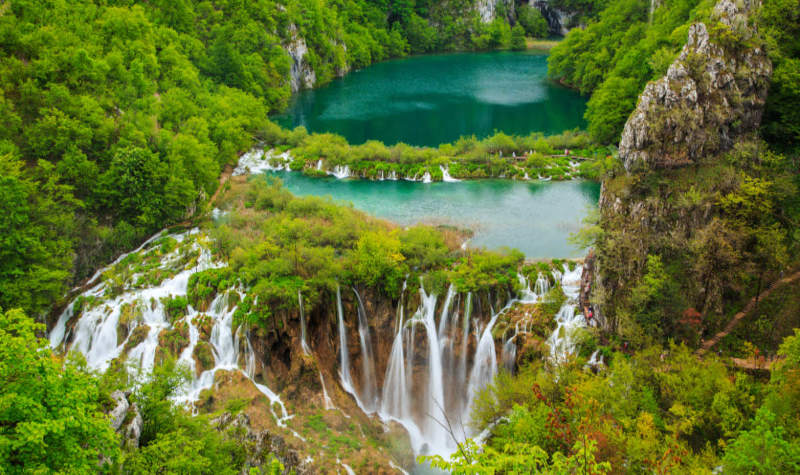 Waterfalls can be compelling in many different ways, and the Plitvice Lakes National Park in Croatia beguiles rather than blows away. A sprawling patchwork of pools, falls and waterways, the whole area is bathed in enough shimmering blues to make Monet go green with envy.

Navigating the whole network will take you at least a day, and the delightfully limpid lagoons make for easy fish spotting. Unfortunately, even during the height of the Mediterranean summer, you’re not allowed to swim.

Niagara Falls is the sort of waterfall you wouldn’t want to bump into in an alleyway in the middle of the night. A solid wall of water battering its plunge pool with a force that reverberates for miles, more than 750,000 gallons tumble over the edge every second.

Up there with the Grand Canyon for American affection, roughly 30 million tourists visit every year. A big, fat zero for elegance; 11 out of 10 for power.

Not all Iceland’s water is frozen solid, and Gullfoss (also known as ‘Golden Falls’) is one of the most surreal waterfalls you’ll find anywhere in the world. From a distance the river seems suddenly swallowed by the Earth, plunging into a deep crevasse before streaming sedately out to the side.

The North Atlantic nation has a strange penchant for waterfalls. Skógafoss leads the rest of the pack, with a supporting role in the second Thor movie, and spray so vigorous is can cast a mini rainbow on sunny days. 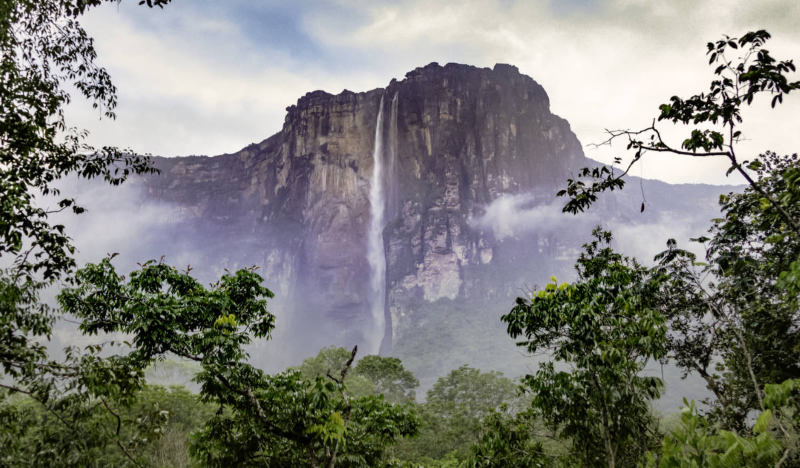 The highest waterfall in the world, the cliff-top drop over Angel Falls is so massive that during the summer months most of the water evaporates before reaching the ground, and, in the right conditions, visitors can feel the spray from almost a kilometre away.

Ensconced in the heart of the Venezuelan Amazon, it’s so remote that it was discovered by mistake during the 1930s, when aviator and namesake Jimmy Angel crash-landed his monoplane near the precipice. It’s 979 metres in total – more than three times the height of the Eiffel Tower.

On paper, Havasu Falls is nothing to write home about. A single-drop, 30 metre waterfall in a remote corner of Arizona, you could be forgiven for prioritising the Grand Canyon, just a couple of hours up the road.

The falls have an interesting history – the canyon is prone to flash floods, which have redirected the flow time after time – but mostly we’re here for the colours. The dusty, reddish-brown rocks; the mossy layer of viridian green; the vibrant, electric blue water that puts the Côte d’Azur to shame.

They say that life’s about the journey rather than the destination, and in the case of Tumpak Sewu it’s at very least both. At the end of a long and winding road through the mountainous jungles of East Java – hundreds of miles from capital Jakarta, or the beaches of Bali – Tumpak Sewu cuts a circular chunk out of the landscape as if fashioned with a giant hole-punch.

As it approaches the precipice, the river splits into countless miniature distributaries that make it seem like the trees are leaking from the roots. 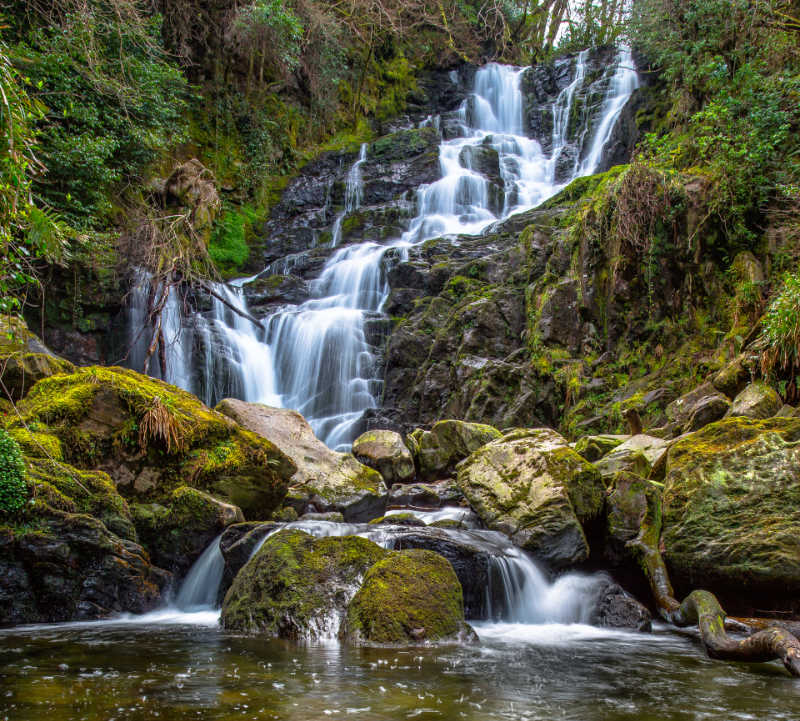 A textbook example of a ‘cascade waterfall’, these undulating streams in the Killarney National Park seem like ethereal veils cloaking the rocks below with a shimmering sheen. Standing at a modest 20 metres, the falls are more about atmosphere than grandeur, and with a mossy stone staircase leading to their location the tone is set nice and early.

An essential stop on the Ring of Kerry route, this secluded waterfall is popular with hikers, and red deer are often seen sipping at the pool.

Akin to those build-your-own wooden marble runs you probably played with as a kid, you could drop a tennis ball into the water at the top of Ban Gioc, and it would probably find a different route down every time.

Surely Vietnam’s finest water feature, the waterfall punctuates the Quây Sơn River as it wends its way through bamboo groves and rice fields, skirting the Chinese-Vietnamese border. Only 30 metres high, but 300 metres across, the falls are at their most impressive between May and September, when the river is at its highest.